Things to See in Lanzarote

Discover Lanzarote:
The Most Important Sights at a Glance

Lanzarote was created from fire and ashes and it is the black beauty of the Atlantic. Due to its exceptional nature, Lanzarote belongs to the special islands of the Canary archipelago. You should have visited it at least once in your life, and not just because it was the first island to be declared a biosphere reserve by UNESCO in 1993. The moon-like volcanic craters and the beautiful beaches are far from its only attractions.

With only about 146,000 inhabitants, Lanzarote is one of the less densely populated Canary Islands. The area of around 846 square kilometers places the island only in the fourth position of the area comparison of the Canary archipelago. Nevertheless, 3.1 million holidaymakers (2017) spend the best time of their year here annually. Prepare for a great vacation on this island. Read here what you must not miss and what are the top sights in Lanzarote.

César Manrique, Son and Patron Saint of the Island of Lanzarote

Anyone visiting Lanzarote will encounter the legacy of the very versatile Canarian artist César Manrique in every corner of the island. Many of the Lanzarote sights bear his signature. One can say that he had a decisive influence on the human-made appearance of Lanzarote. Through his tireless efforts, he achieved that no hotel bunkers have been built on the island and that hardly a building is more than two floors high. It is thanks to him that environmental protection played an important role early on in the actions of political decision-makers on the island. Building sins and massive destructive interventions in the island's ecosystem were prevented.

Simply click on the respective point of interest on the map and you will automatically be directed to the relevant information. Have fun exploring the island.

The smallest inhabited island in the Canary Islands has only recently received the official status of the eighth Canary Island. It is perfect for those who are looking for peace, relaxation and deceleration. Almost all of the only 700 inhabitants live in the town of Caleta de Cebo. There are no paved roads on the entire island, and certainly not between the houses. As a result, pedestrians and cyclists dominate the picture on the gravel and sand slopes. Don't forget your bathing suit, because you should definitely enjoy a swim in the Atlantic Ocean on the great sandy beaches. 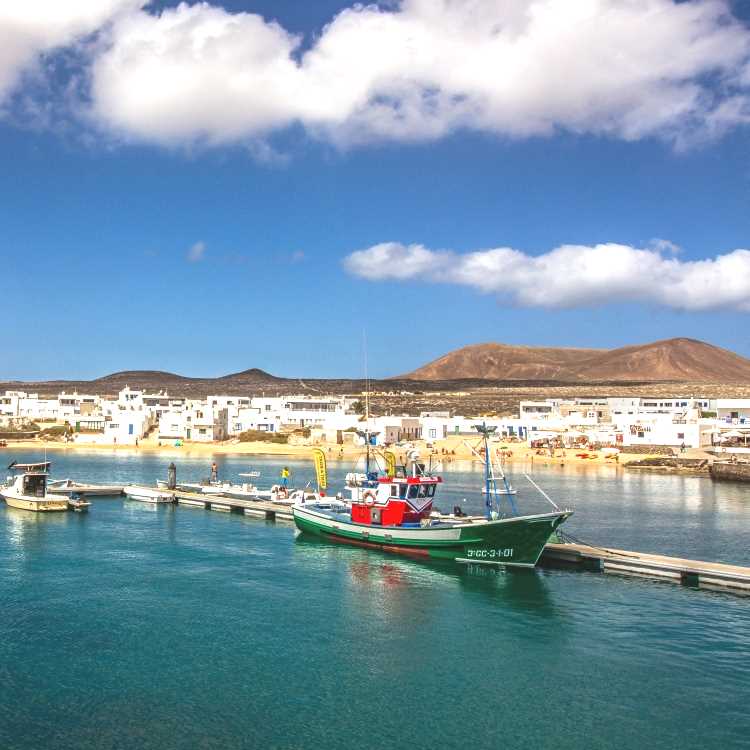 César Manrique created an architectural masterpiece here in 1973, the design of which has not lost its modernity to this day. It is undoubtedly the most sensational viewpoint on the island. Built at a height of 400 meters of the Famara massif, you have the best view of the steep coasts of the mountains and the small neighboring island of La Graciosa. On the upper level of the view point there are two large terraces with unlimited foresight. In the lower part there is a restaurant inside the building with a huge panoramic window, so that you don't have to do without the wonderful view. 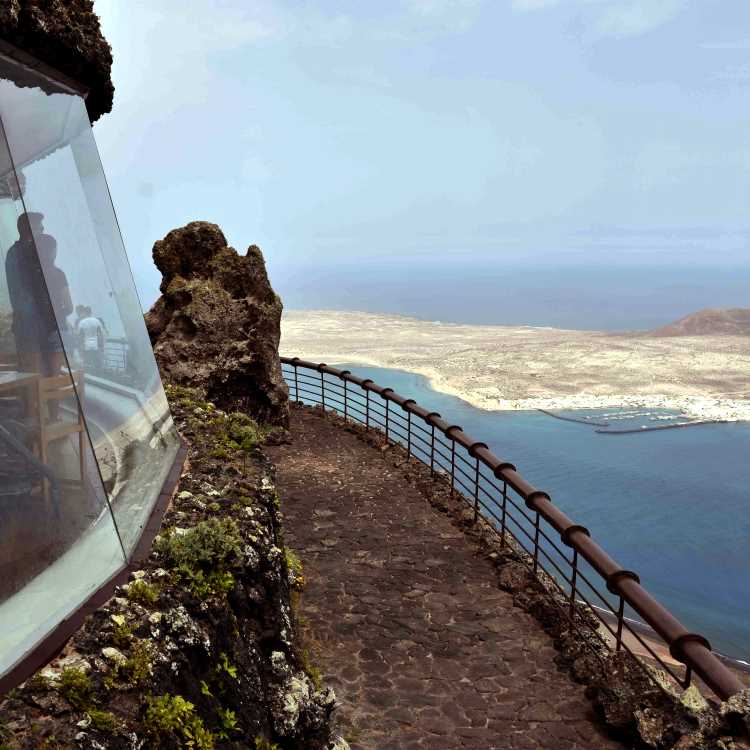 One of the most impressive sights of Lanzarote is the Cueva de los Verdes in English: “Cave of the Greens”. The huge lava tube was created more than 5,000 years ago during a volcanic eruption and extends 7 kilometers into the interior of the rock. You can visit about 1 kilometer of it on a guided tour. On the 45-minute visit you will learn everything about this extraordinary natural phenomenon. The ceiling is extremely high in the front part of the cave and the area has great acoustics and was therefore converted into a concert hall. Concerts for up to 300 people take place here regularly. 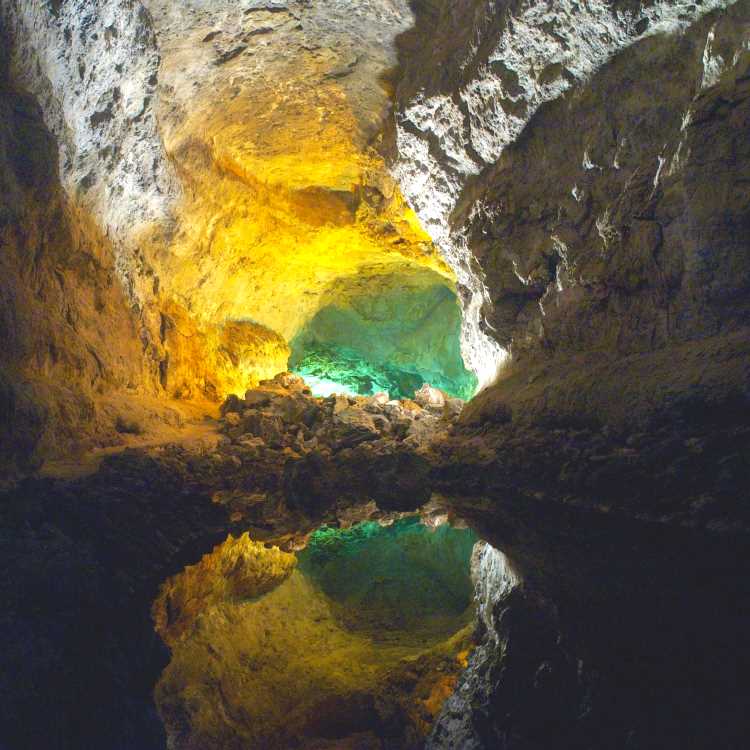 This complex also comes from the artistic work of César Manriques. The most impressive part of this sight is a natural lava grotto with an underground lake. It is located in the lower area and is expertly irradiated by an elaborate lighting system. The lights are reflected by the lake, what provides a very mystical atmosphere. The rare albino crabs also live in this lake. In the upper area of the complex you can relax by a watercolor- tinted pool and also get to the “Volcano House”, which houses a museum on the volcanic history of Lanzarote. 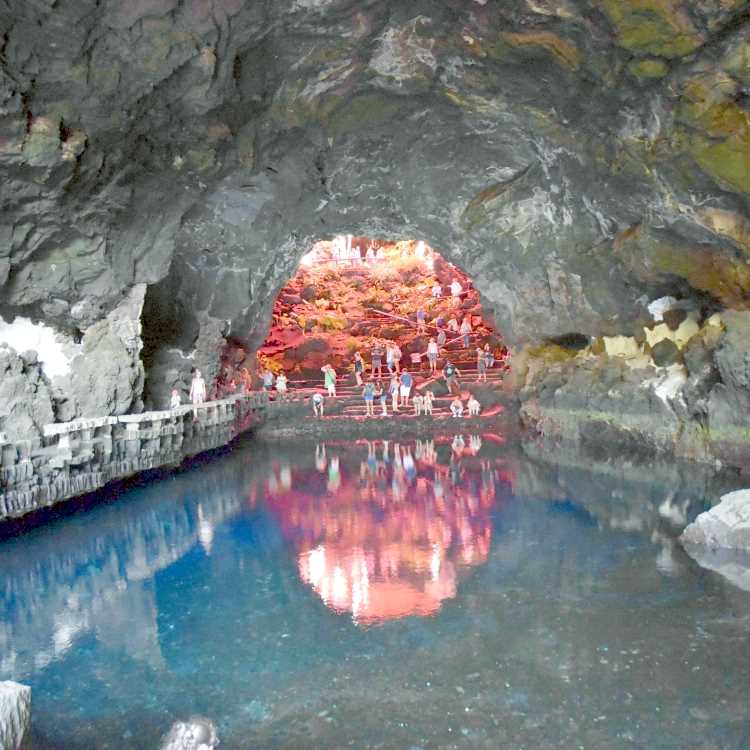 This small place is a hotspot for surfers of all categories, because the beach of the same name has perfect conditions for surfers, windsurfers and kitesurfers almost all year round. Beginners and advanced players are in good hands here. Various courses can be taken in the adjacent surf schools. If you need equipment, you will also find sufficient rental options in the local surf shops. Even if you don't like surfing, you are lying on a paradisiacal sandy beach about 1.5 kilometers long, which is perfect for beach lovers. Due to its northwest location, this beach also offers spectacular sunsets. 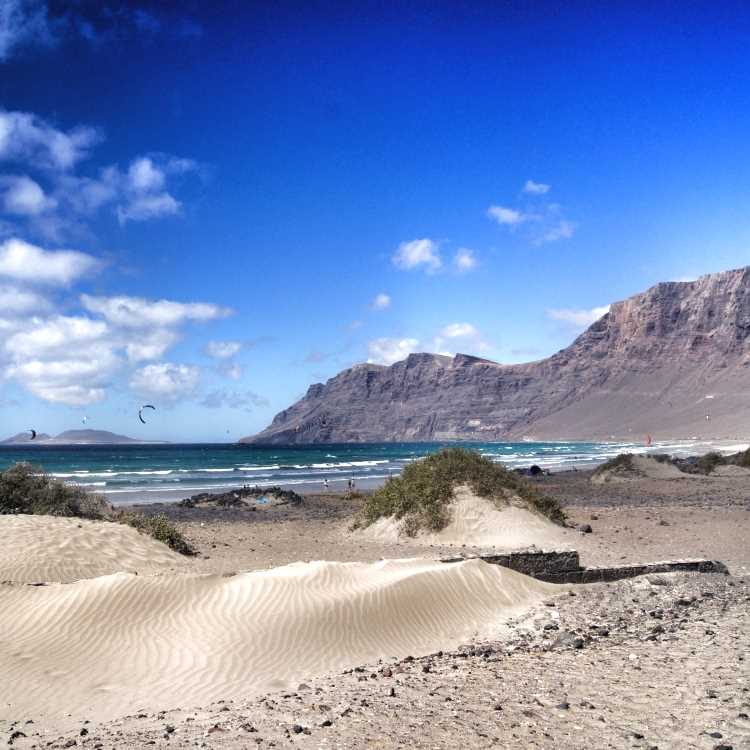 Shortly before César Manrique's death in 1992, he was able to complete this last work. The cactus park can be found on the outskirts of the village of Guatiza. Manrique's style is clearly recognizable. The park is laid out on various terraces to which paved paths lead. An old corn mill is part of the pretty facility. The 450 species of cactus come from 5 different continents. In total, the Jardín de Cactus is home to around 4,500 cacti. It is not one of the largest of its kind, but it is certainly one of the most beautiful cactus parks and definitely worth a visit. 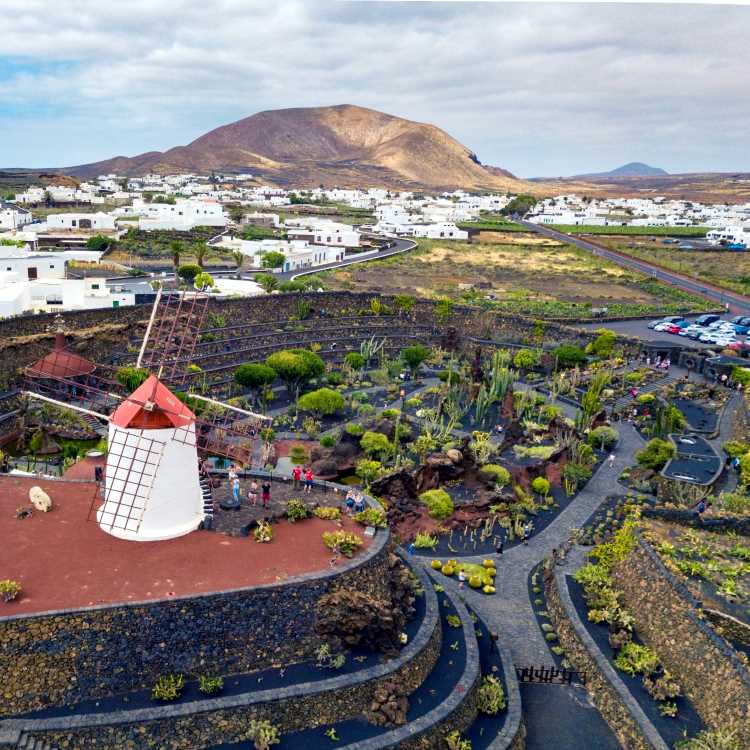 Teguise and the Pirates

Teguise was one of the first towns that the Spanish conquistadors founded on the island. It was the capital of the island until the mid-19th century. The fortress Castillo de Santa Bárbara, which now houses the Pirate Museum, still bears witness to the city's bloody past. Teguise has repeatedly faced brutal pirate attacks in the past. Even the fortress, built especially for defense, was little help. Today various plaques are commemorate the bad times. On a Sunday it always gets busy in the village, because then the local weekly market takes place from 9 a.m. to 2 p.m. 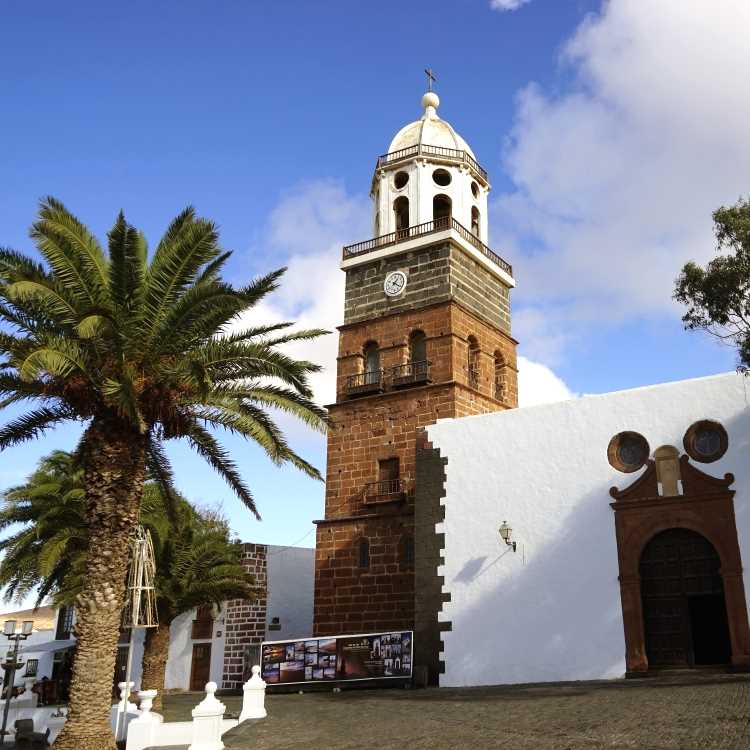 Stratified City - Stones From Another World

An insider tip that you should take a look at. These remarkable rock formations are easily accessible by rental car on the LZ-404. In the middle of them you feel like on the surface of an alien planet. The existing shapes and colors could also be reminiscent of a painting by Salvador Dalí. Every single stone massif has its own shape. Wind, rain and sun ensure that the rock formations keep changing their appearance. The small caves, holes and tunnels that have been created over thousands of years offer children a perfect area to play hide-and-seek. 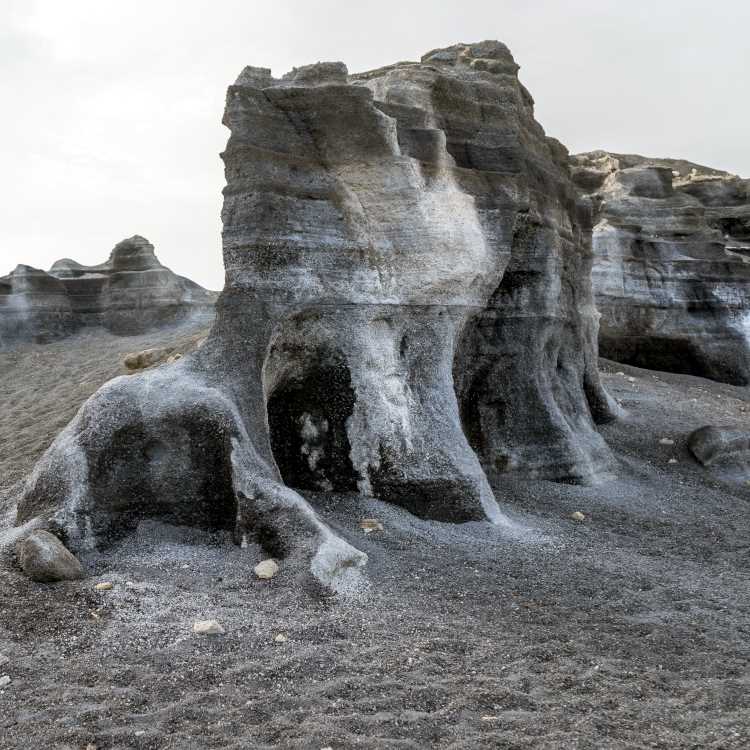 The LagOmar in Nazareth is an exceptional house, with an extraordinary history. It was designed by César Manrique in the 1970s and built into an old quarry. Legend has it that famous Hollywood actor Omar Sharif once bought this house and lost it at a game of Bridge on the day of purchase. Today this building can be visited as a museum. In his bar “La Cueva” there are cool drinks and an exclusive garden with a pool invites visitors to stay. 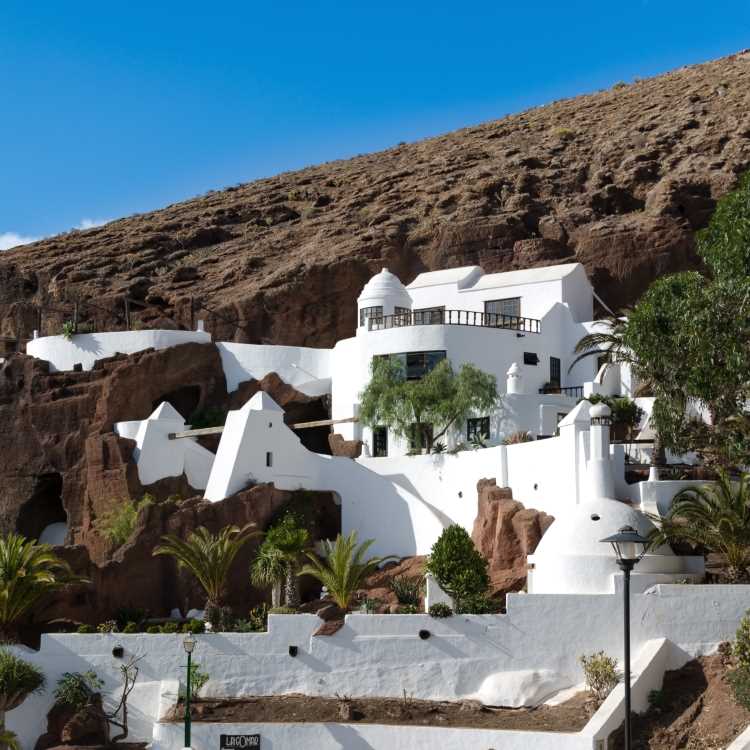 It is one of the first sculptures by César Manrique, the Monumento al Campesino. You will find it in the village of Mozaga located pretty much the center of the island. The approximately 15 meter high structure consists of concrete and old water tanks. Manrique dedicated it to the local farmers who, through their immense effort and hard work, created fertile soil from the arid lava earth of the island. There is a museum right next door, in which exhibits from the artisanal life of the inhabitants of Lanzarote are displayed. Admission is free. 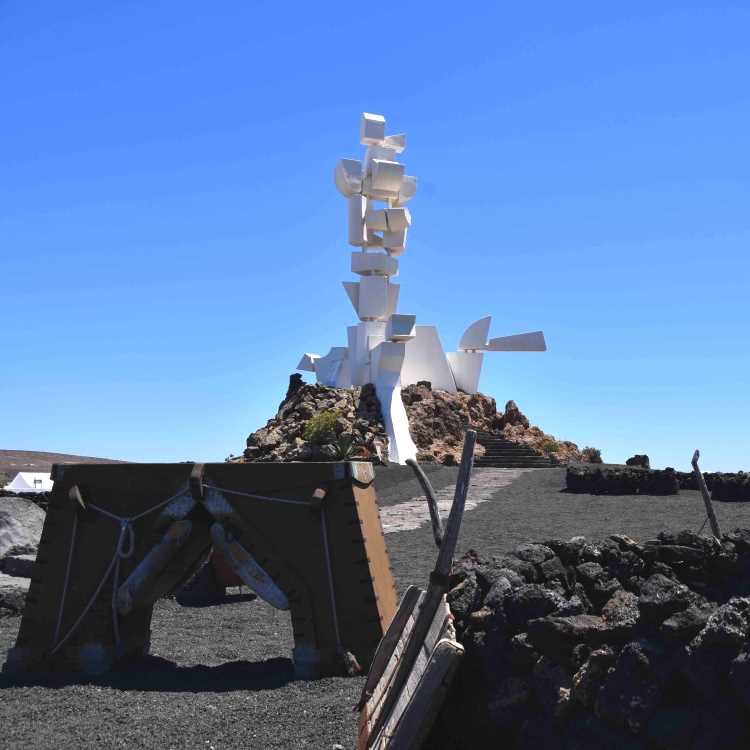 Fundación César Manrique - How He Lived

In the village of Tahíche you will find this house that was built in 1968. The artist lived here for over 20 years. After moving out from there, he himself turned the building into a museum. Some of the rooms in the house have been integrated into a total of 5 natural lava bubbles and it naturally filled with Manrique's art. Manrique has also left numerous of his works of art on the surrounding grounds. His former home now houses the Foundation (Fundación) César Manrique. This is to help protect Lanzarote's cultural heritage and promote environmental protection and the arts. 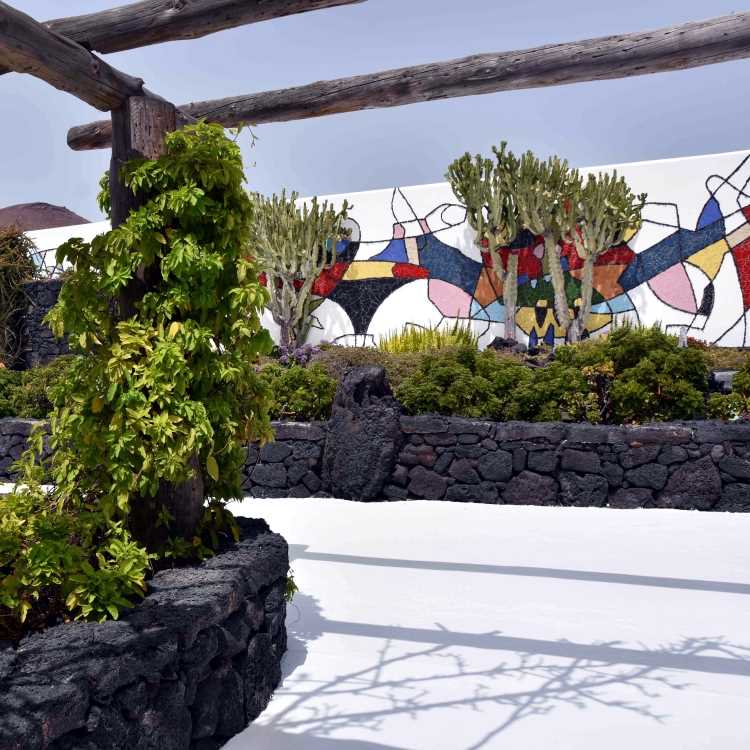 El Cuervo - Dance on the Volcano

The volcano El Cuervo is a worthwhile destination for hikers and interested. Located south of Mancha Blanca near the LZ-56, it is easily accessible by car. From the parking lot you will be there in about 20 minutes walking. Around the extinct volcano, there is a circular hiking trail of about 4 kilometers in length. The official hiking trail is well signposted and can be done by everyone. It is also possible to walk into the crater on a short path. Depending on the position of the sun, the mountain shines in different colors. 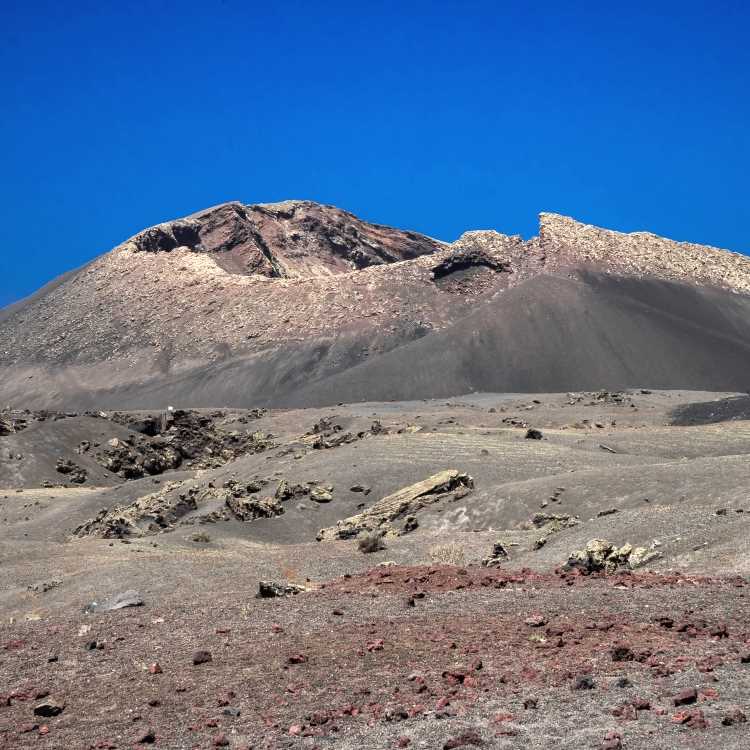 It is undoubtedly the most famous of the Lanzarote sights. There are volcanic vents in the Timanfaya National Park as far as the eye can see! Here you can visit these famous fire mountains “Montañas de Fuego”. Its gleaming past was only 200 years ago when the last volcanic eruptions occurred. In the chargeable part of the park, you can have grilled chicken prepared in a lava hole in the El Diablo restaurant that was designed by Manrique. These holes protrude about 6 meters deep and are up to 600 degrees hot. Water poured into them evaporates instantly and is expelled under a roar and in a high fountain. 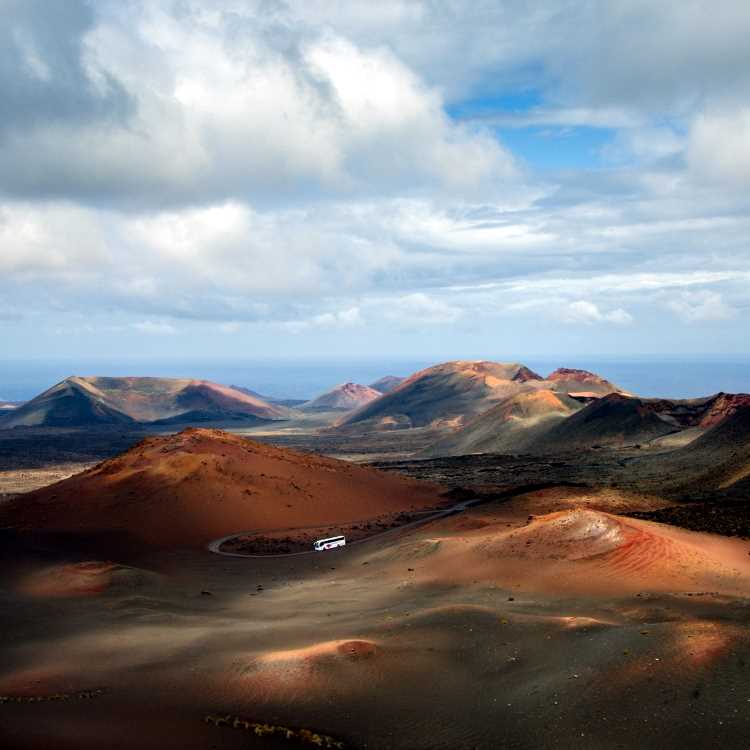 El Golfo and the Green Lagoon

El Golfo is now one of the more famous fishing towns on the island. You can enjoy freshly caught fish in one of its 10 fish restaurants with a wonderful sea view. Fortunately, despite the growing tourist flow, the place does not lose its original charm. El Golfo owes its fame to its green sea water lagoon El Lago Verde, which is located on the beach Playa El Golfo. The green of the small pond in the middle of the deep black volcanic sand shines in the sun like an emerald. Its bright green color comes from algae that have settled in the lake. 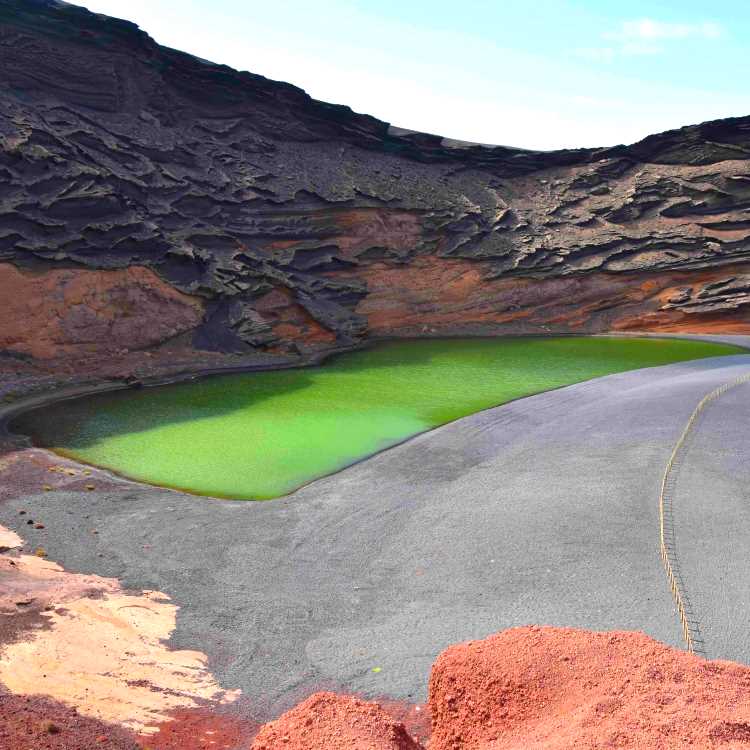 This stunning natural spectacle takes place near the state road LZ-703 north of La Hoya. At this place the forces of the sea meet a steadfast bulwark of cooled lava rock. Los Hervidores owe their origin to the last volcanic eruption in 1824. Since then they have persisted, the powerfully rolling in waves. Especially at high tide, the waves hit the rocks particularly strong and the sea water splashes in all directions. Different viewpoints offer great visions of the lava rocks with their tunnels and holes that the sea has gradually knocked into its walls. 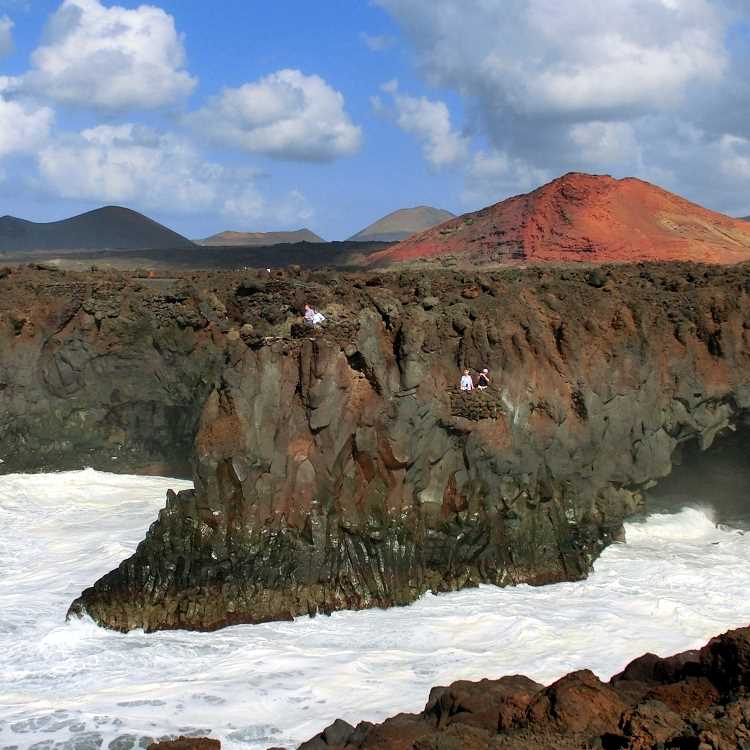 At the southeastern tip of Lanzarote you will find the most beautiful beaches on the island. In each of the 8 adjacent bays there is a wonderful and natural sandy beach. You can get there by car driving on a gravel road with no difficulty. But hikers and bikers can also get to the beaches easily. And there are boat tours too that take you there by sea. First you can admire all 8 beaches and then you have shore leave and time to bathe in turquoise-blue, clear water. At the best known of the beaches - Playa de Papagayo - you can have a have snack in a restaurant or a bar. 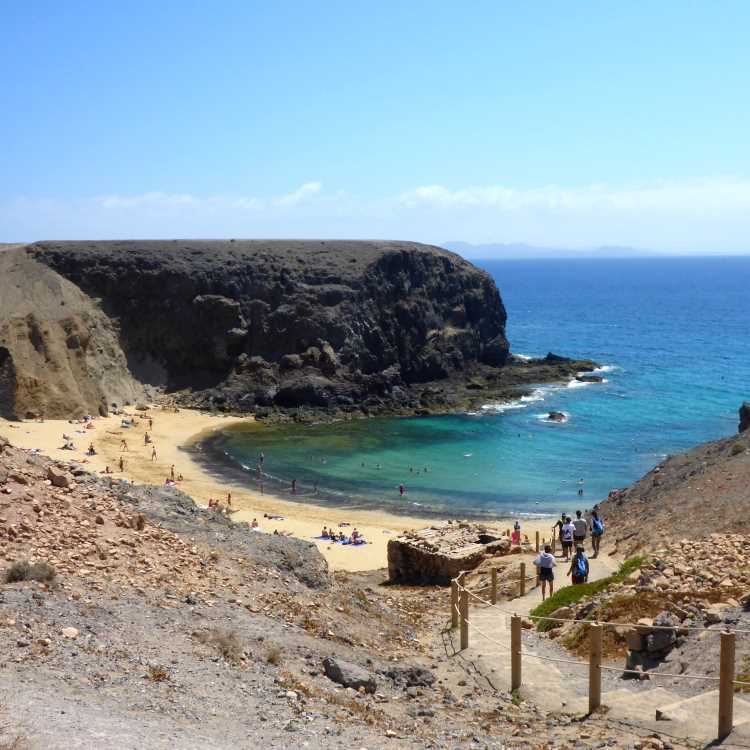